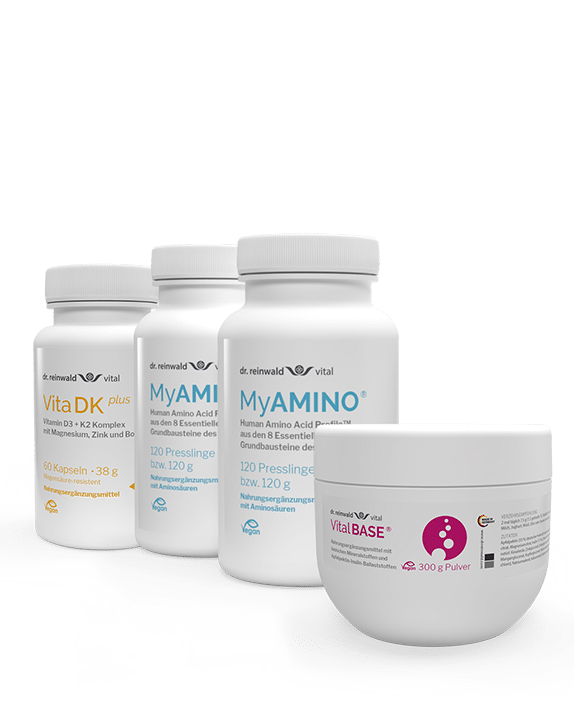 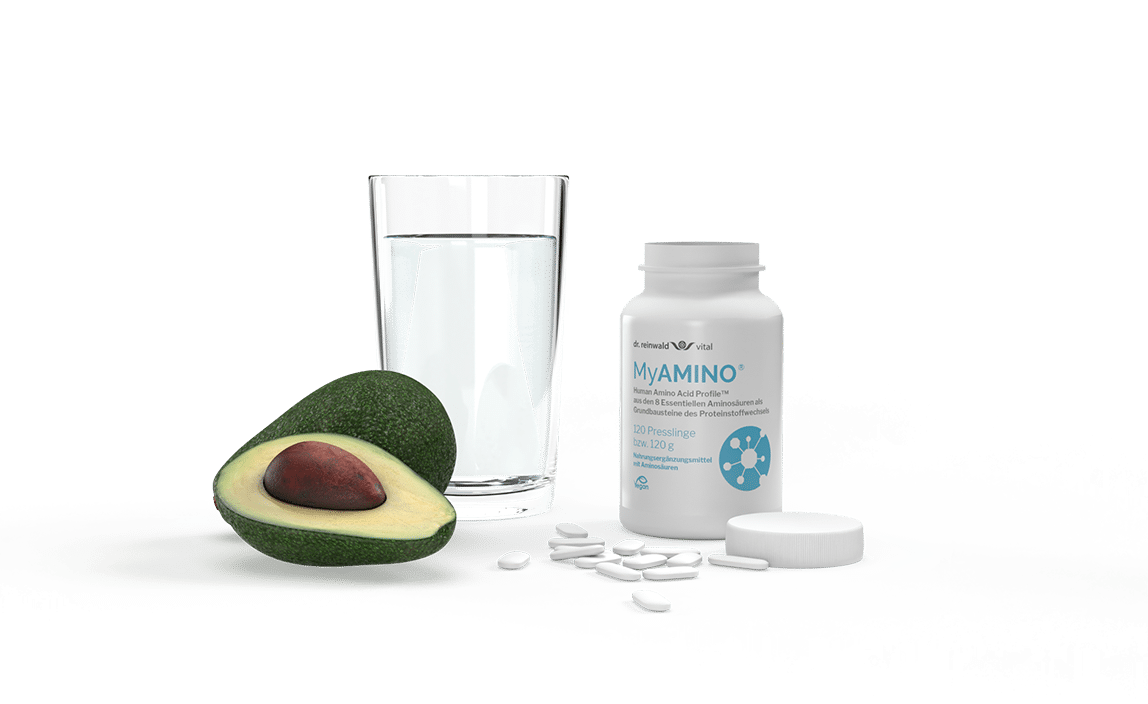 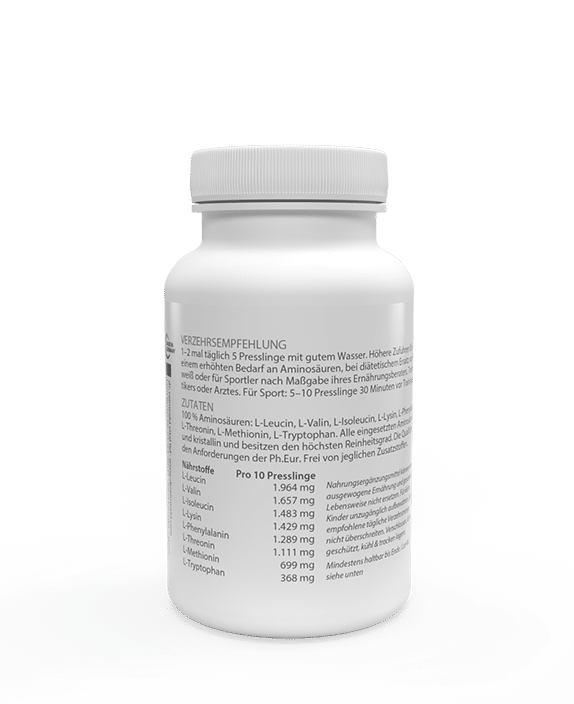 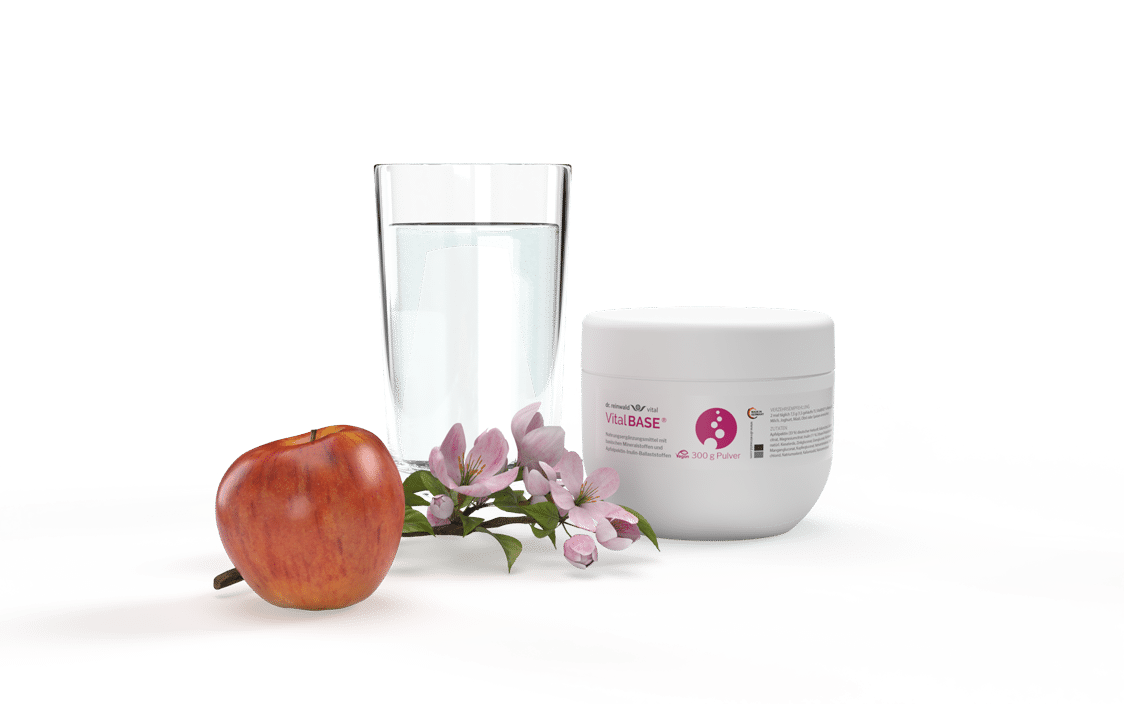 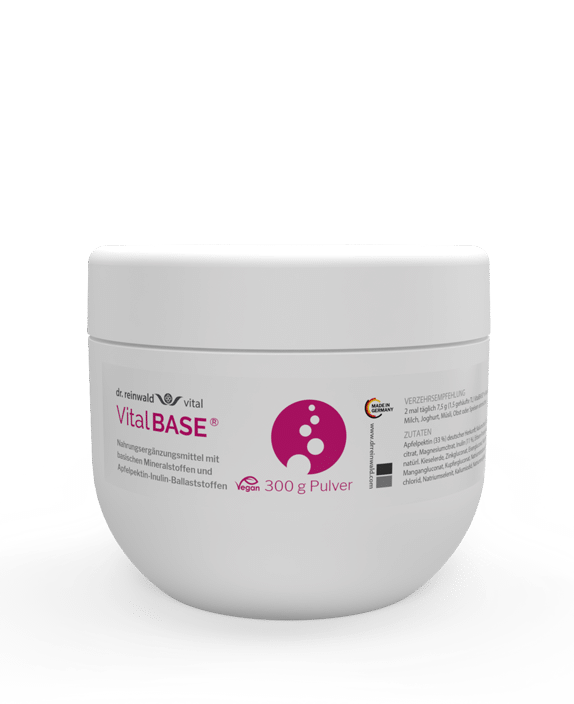 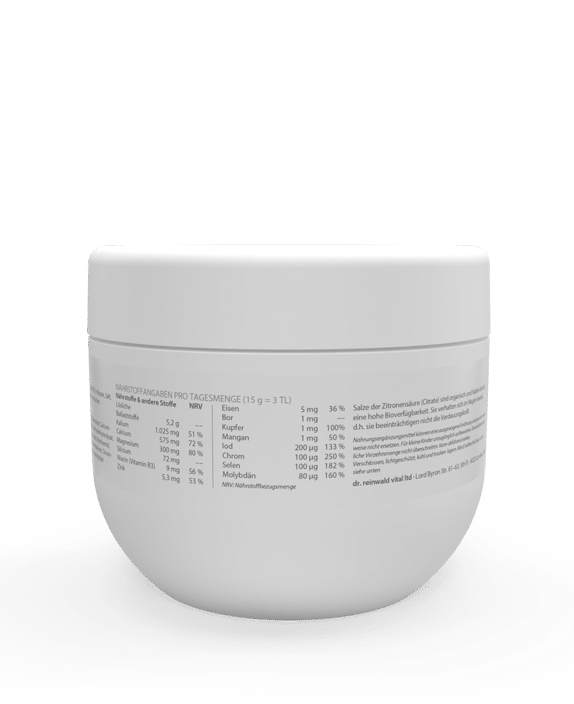 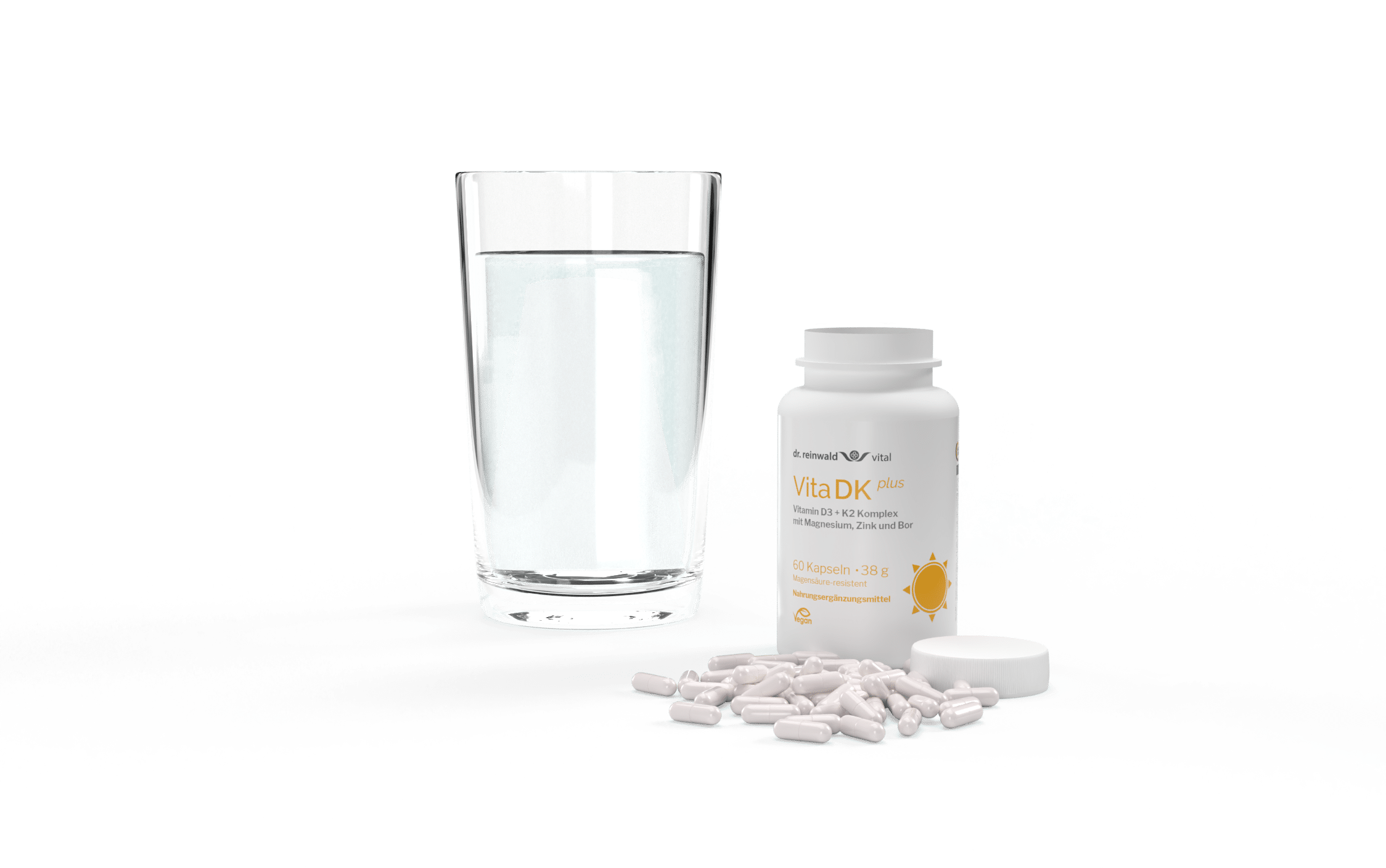 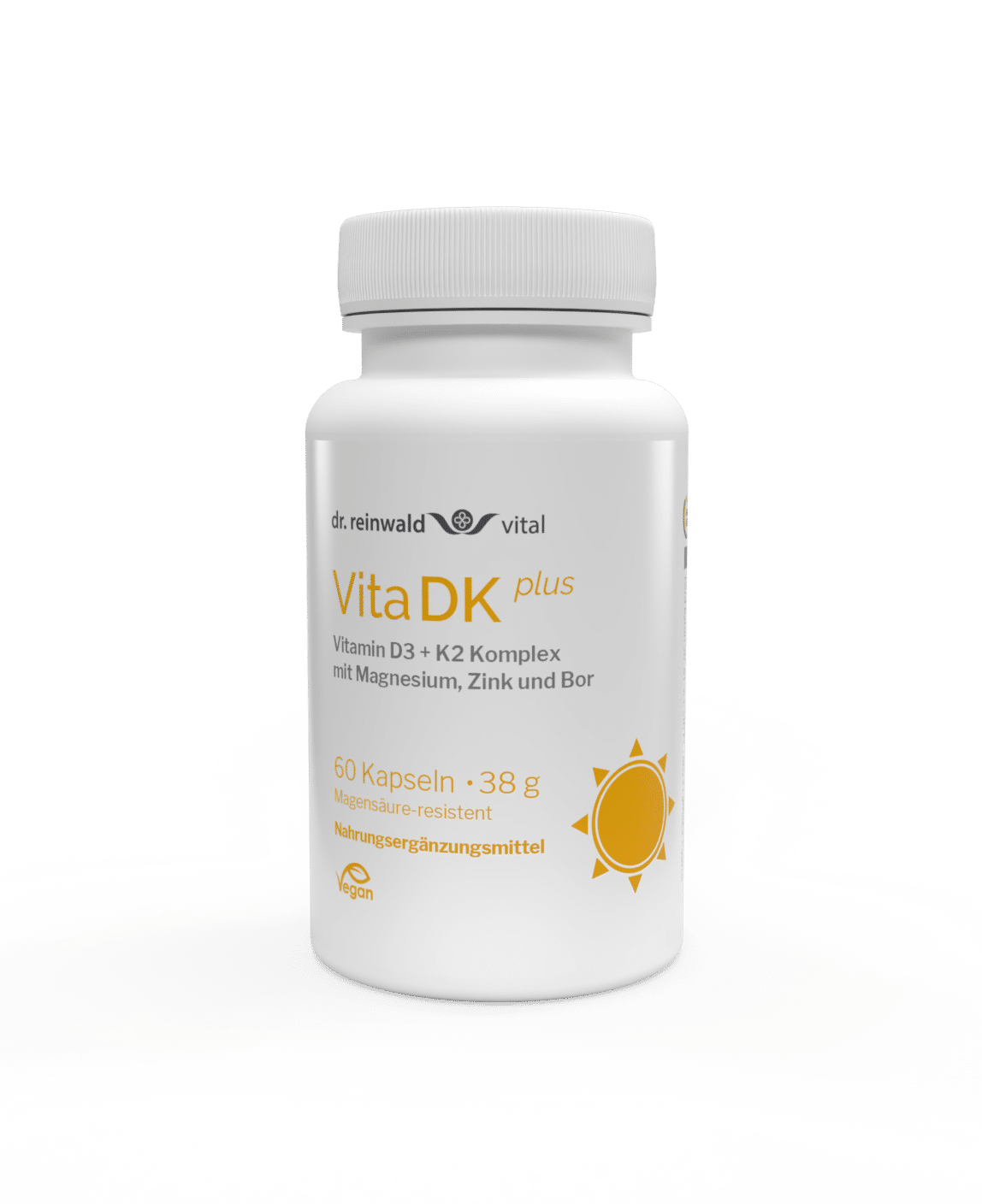 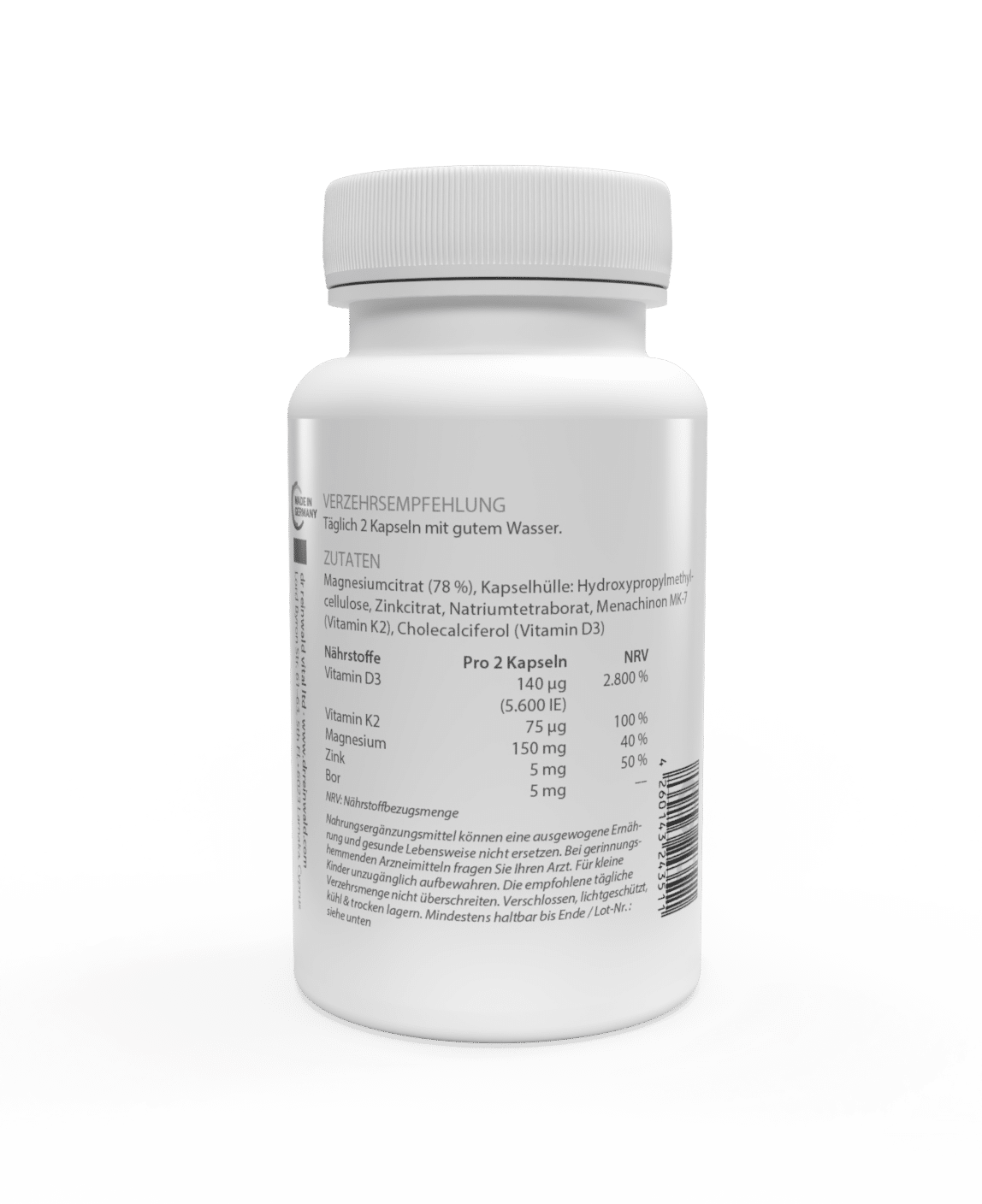 Your sensible nutritional enhancement with the eight essential amino acids as well as vital micronutrients.

With a NAV of ≥ 99%, MyAMINO® achieves the worldwide highest value in protein nutrition, that means almost all its amino acids can be used for the body´s protein synthesis and thus to build up new cells. MyAMINO® has almost no calories since only 1% glucose can be produced from 1% metabolic waste. People with low carbohydrate intake (e.g. such with elevated blood sugar levels) can therefore greatly reduce their load of glucogenic substances from the protein diet by substituting food proteins with MyAMINO®.

Proteins or their building blocks – the amino acids – are not only a vital component of our food. They are the basic building blocks of our protein metabolism and form the basic building material for our entire organism. They are used to constantly renew the mass of living cells that form muscles, organs, bones, antibodies, enzymes, etc. Already the name protein, derived from the Greek “proteuo” or “protos”, tells us that it takes “the first place” and thus is the “most important” nutrient in the human diet.

MyAMINO® is a revolution in protein nutrition

Comparision to other protein sources

Vitamin D3 and vitamin K2 are an unbeatable team when it comes to strengthening your immune system and your bones! Vitamin D3 is involved in many vital processes in our body. Among other things, it promotes the absorption of calcium from food. Vitamin D should always be combined with vitamin K2, because vitamin K2 supports the positive effects of vitamin D3 by activating proteins (such as osteocalcin), thus ensuring that calcium reaches the bones and is not deposited in the blood vessels. The body needs magnesium for the activation of vitamin D3. The trace elements boron and zinc also improve the effect of vitamin D3.

In VitaDK plus you will find vitamin D3 combined with the co-factors involved in a balanced, perfectly coordinated ratio! You benefit from the synergistic effects with just two capsules a day. All nutrients are 100% vegan and of carefully selected premium quality!

Vitamin D is involved in numerous metabolic processes in our body. It plays a key role in our immune system, the health of our bones and muscles, and our nervous and cardiovascular systems. A sufficient supply of vitamin D is therefore not only essential for our physical performance, but also for the prevention and treatment of numerous chronic and serious diseases.

VitaDK plus, specially developed by dr.reinwald vital, is a synergy complex that develops a particularly effective effect by combining the sun vitamin D3 with the other important nutrients menaquinone MK-7 (vitamin K2), magnesium, zinc and boron. In this way, you benefit not only from optimal bioavailability, but also from high efficacy. For optimized absorption, we recommend taking VitaDK plus together with some fat or a meal containing fat, vitamins D + K are fat-soluble vitamins.

Alkaline minerals and trace elements based on organic citrate

VitalBASE® with apple pectin is a synergistic recipe. It aims to support the organism during maintenance of the metabolic equilibrium, in particular the acid-base balance. It achieves this by making additional, bioavailable buffer capacities available for acid neutralisation.

The particular characteristics of the formula are:

VitalBASE® with apple pectin does not contain sweeteners and fillers such as sugar (e.g. lactose, sucrose, dextrose) or artificial sugar substitute (e.g. aspartame). This is in contrast with many other base mixtures. We also avoid the use of carbonate-based salts (also hydrogen carbonate), as they already develop their effect in the stomach and can impair the ability to digest, especially in older people.

Apple pectin, on the other hand, compliments the mineral substance compound of organic salts (ca. 60% of the compound), naturally on a citrate basis which is “digestion neutral”, in order to support the digestion promoting element of dietary fibers. Pectins from fruit and vegetables are among the so-called bioactive substances and develop a cleansing effect in the intestine by supporting the body during daily detoxification processes.

Inulin, a probiotic dietary fiber, serves the microorganisms conducive to health in the small intestine as nourishment. In the process it can promote a favourable intestinal milieu and strengthen the immune system. Experts assume that nowadays we consume just 10% of the amount of dietary fiber compared with the average of the rural population 50 years ago.

VitalBASE® with apple pectin is optimally bioavailable. Minerals essential for acid equilibrium such as potassium, calcium, magnesium and sodium are present in a well-balanced amount and an organically favourable citrate form for the body. This guarantees good absorption, as no unfavourable interaction with acidic gastric digestion takes place.

VitalBASE® with apple pectin also contains important trace elements for the basic human supply such as zinc, copper, manganese, molybdenum, chromium and selenium and also silicon from silica, which reinforces skin, hair and nails as an anabolic agent and strengthens the connective tissue.