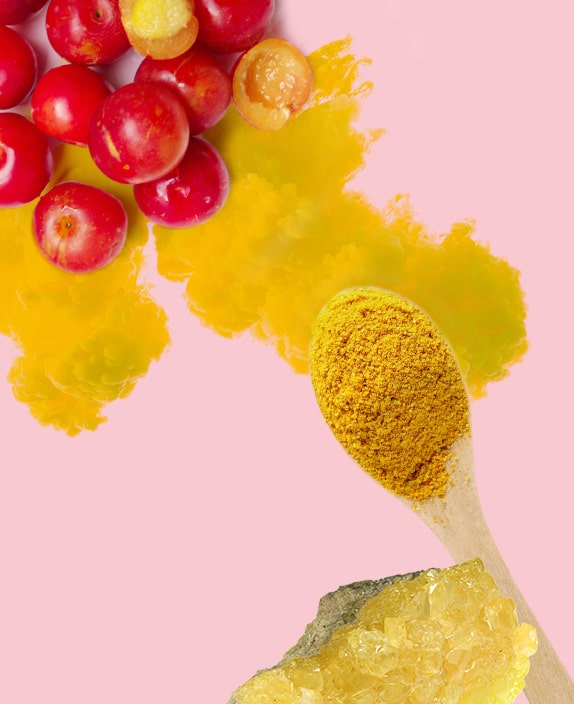 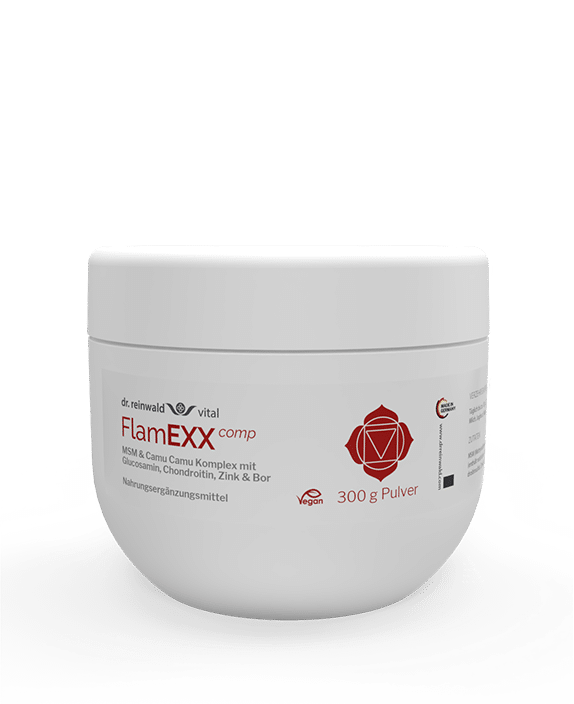 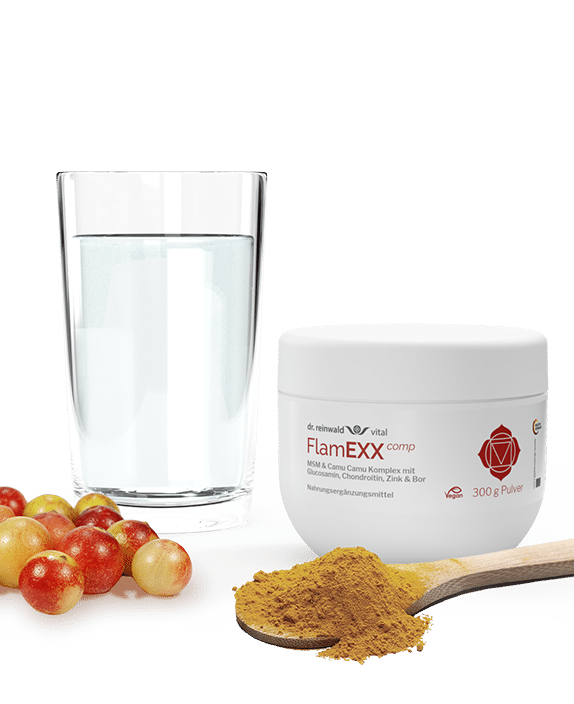 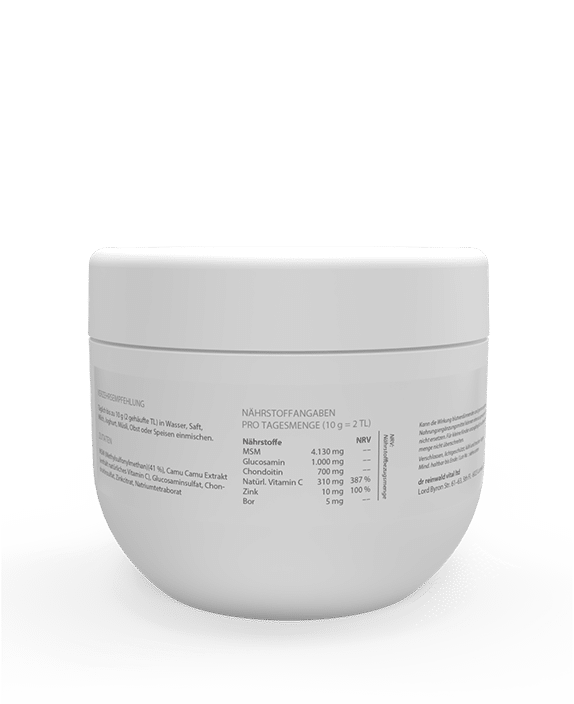 For a strong anti-inflammatory power as well as a good immune system, strong bones and stable joint function

Highly effective due to the unique synergy effect

For the body’s natural capacity to modulate inflammation

FlamEXX comp provides perfect power from the body’s own substances MSM, glucosamine, chondroitin together with high-dose vitamin C and the cofactors zinc and boron for a strong anti-inflammatory power as well as a good immune system, strong bones and stable joint function. Optimum bioavailability and metabolic effect thanks to the synergetic recipe – for quick replenishment of the body stores and for your daily supply.

In FlamEXX comp you will find MSM & Camu Camu combined with the cofactors involved in a balanced, perfectly coordinated ratio! You benefit from the synergy effects with just two teaspoons a day. Mix the powder into water, juice, milk, yogurt, muesli, fruit or food. All nutrients are of carefully selected premium quality!

FlamEXX comp supports the areas most affected by inflammation:

The most important nutritional benefit of this synergistic complex is the increase of the body’s anti-inflammatory capacity. All the ingredients of FlamEXX comp contribute to this – but especially MSM and glucosamine, which occur naturally in the human organism, where they have the task of limiting inflammation, among other things.

MSM, glucosamine and chondroitin are used in particular for discomfort of the musculoskeletal system (joints, tendons, muscles), as they support function and regeneration and are also known for effective pain-relieving and anti-inflammatory properties. In addition, the trio of MSM, glucosamine and chondroitin are known for providing elementary building materials for the body biosynthesis of cartilage in joints or for collagen synthesis for bones, supporting and connective tissue. One reason why they also help improve the appearance of the skin as well as hair and nails, which consist of keratin, a water-insoluble fibre protein, that require the above-mentioned building materials in addition to essential amino acids for its synthesis.

But also vitamin C is known for its anti-inflammatory properties. The particularly high-quality vitamin C in FlamEXX comp comes from the vitamin C-rich camu camu plant and is purely natural and maximally bioavailable. FlamEXX comp contains about one third of the holistic extract of camu camu, a myrtle plant that is considered a traditional remedy by the indigenous peoples of South America.

More information about the product background

Unique synergy effect
Made in Germany

FlamEXX comp is without following substances:

FlamEXX comp is good for: 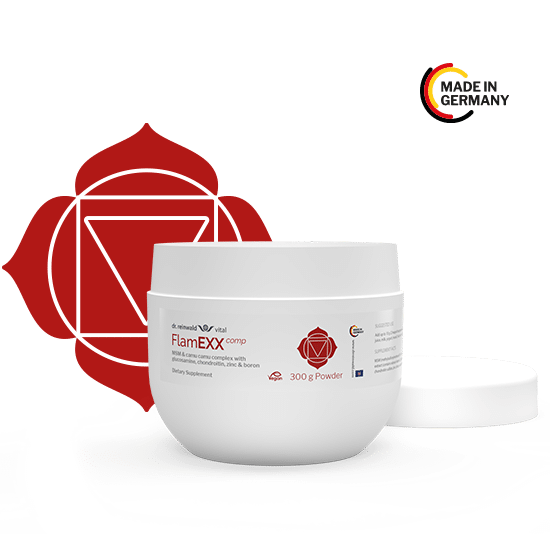 FlamEXX comp – your booster for a strong anti-inflammatory power as well as a good immune system, strong bones and stable joint function 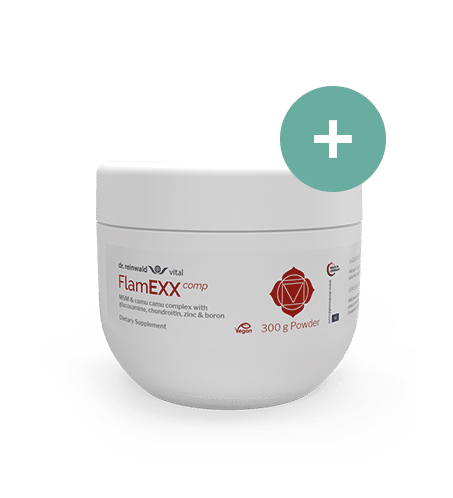 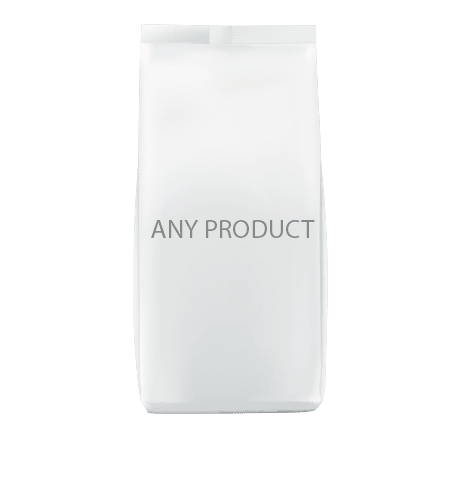 Conventional MSM supplements
Be sure to check before you buy:

FlamEXX comp and its synergies

FlamEXX comp is also a synergy complex that develops a strong effect through the combination of MSM, camu camu, glucosamine and chondroitin with zinc and boron.

Glucosamine occurs naturally in connective tissue, cartilage, joints and synovial fluid. Like the natural substance MSM, the body uses glucosamine to regulate inflammation and pain and to regenerate collagens, such as in joint cartilage. It is a simple sugar that has bonded with an amino acid. In FlameXX comp we use the compound glucosamine sulphate which has a much better bioavailability than, for example, glucosamine hydrochloride, which is mainly used in other food supplements.

Chondroitin sulphate, usually called chondroitin for short, is also an amino sugar that is formed by our cartilage cells. As an endogenous component of cartilage, chondroitin ensures its resistance to pressure and stress. Chondroitin is said to have anti-inflammatory and cartilage-building effects. Only recently, the role of chondroitin as an immune modulator has also come into the focus of science.

Zinc is a cofactor of numerous enzymes; it has great importance for the acid-base balance; it is also an important cofactor of glutathione peroxidase and therefore essential for protection against free radicals, where it also serves to protect against inflammation.

Boron is a trace element that occurs naturally in the form of the salt of boron (borax) and is contained in various foods, especially in vegetables such as broccoli, fruit and nuts. Boron is stored distributed throughout the body. The highest concentration is found in the parathyroid glands (parathyroid hormone), which together with the thyroid glands (calcitonin) are responsible for calcium metabolism, followed by bone and tooth enamel. In naturopathy, boron has long been considered an important trace element for bone nutrition, as it is indispensable for healthy bones and joints and has anti-inflammatory effects, which particularly alleviates joint problems (osteoarthritis and arthritis) and the associated pain.

Boron deficiency, on the other hand, causes hyperactivity of the parathyroid glands, which then secrete too much parathyroid hormone. The hormone releases calcium from the bones and teeth. This leads to joint osteoarthrosis and other forms of arthrosis and arthritis, as well as osteoporosis and dental damage. In return, the calcium level in the blood rises. With increasing age, high calcium levels lead to calcification of soft tissues, causing muscle tension and joint stiffness. The arteries (arteriosclerosis) and endocrine glands, especially the pineal gland and ovaries, also calcify. Kidney stones and kidney calcification can also occur. Boron deficiency in combination with magnesium deficiency is particularly harmful for bones and teeth.

Due to slag-dissolving effects, excretory reactions such as diarrhoea, skin rashes, tiredness or headaches may occur initially, which accompany the excretion of undesirable substances. We therefore recommend increasing the consumption of two heaped teaspoons within two weeks.

May increase the effect of blood-thinning and anticoagulant medicines.

Legal note: This product is for nutrition and therefore does not affect any Drug Act of any country. A good nutritional status can help the organism prevent or to overcome diseases. All statements describe characteristics and physiological effects, which can be different for consumers, and do not constitute a healing or health promise. Many of the claims used are evaluated by the European Food Safety Association (EFSA).

Inflammation – trigger for many diseases

Inflammatory processes are involved in almost all acute and chronic symptoms and can occur in all parts of the body. In addition to overt, easily diagnosable inflammations, there are also very often subclinical, insidious inflammatory foci that are often not recognised over the years. Chronic inflammations can subsequently promote other illnesses, such as cancer or neurodegenerative diseases.

MSM, glucosamine and chondroitin: important substances produced by the body

When you hear or read about MSM or Methyl Sulfonyl Methane, you immediately think of a nasty chemical compound. But far from it! What sounds like chemistry is actually “pure nature”: the natural substance methyl sulfonyl methane was already discovered 150 years ago by Russian scientists. MSM is a naturally occurring form of organically bound sulphur. It is found in varying concentrations in the human organism. As organic sulphur, MSM is a vital nutrient and also has excellent biological availability when taken orally.

MSM also helps to modulate inflammatory troubles in the gastrointestinal tract and in the urogenital area. It is particularly well tolerated, as MSM also fulfils the function of an anti-allergen in the body. By supporting a natural protective layer on mucous membranes, such as in the mouth and nose, but especially in the intestines, it can not only ward off parasites, fungi and bacteria, but also allergic reactions and also bind allergens and foreign substances so that they can be flushed out. The regulation of parasites and fungi in the gut relieves the intestinal mucosa and contributes to a favourable intestinal environment. MSM is indispensable for the body as a component for the production of bile and thus supports both fat digestion and fat absorption and consequently the detoxification function of the liver.

Organic sulphur is a vital element for numerous metabolic processes. It supports oxygen uptake in the blood and can therefore help to improve blood circulation and oxygen supply to the cells and brain. It improves the permeability of cell membranes, which in turn contributes to healthy oxygen and nutrient uptake into the cells as well as the removal of waste products from the cells. Therefore, please note that initially excretion reactions can occur, which can be quite severe depending on the body‘s own slagging. These include diarrhoea, skin rashes, fatigue or headaches, which often accompany the excretion of unwanted substances. This can be remedied by “creeping in”, i. e. slowly increasing the amount consumed.

By improving cell membrane permeability, sulphur increases the metabolism of vitamins, minerals and other nutrients. In addition, the function of hormone metabolism (especially that of insulin) as well as the pH-dependent action of enzymes, immunoglobulins, protein synthesis and the structure or strength of cartilage, connective tissue, skin, hair and nails etc. are directly dependent on the supply of sulphur and its elemental compounds. MSM has the same advantages as the rather malodorous DMSO (dimethyl sulphoxide), but is tasteless and above all odourless.

The role of sulphur in the body‘s own detoxification: especially in glutathione metabolism

Sulphydryl groups (thiols) such as those in MSM are themselves able to bind undesirable substances in the body. In addition, however, they are significantly involved in the synthesis of important, endogenous detoxification substances. First and foremost among these is glutathione. Glutathione in its reduced form under the name Glutathione Sulph Hydril or GSH for short is one of the body‘s most important antioxidants and plays a key role in all detoxification processes. Reducing toxin load in the body, in turn, reduces inflammation. Gluthatione is found in every cell of the body and all organs, especially the eyes, liver, pancreas, but also in the immune system. It is a central molecule for a whole range of physiological processes.

GSH is absorbed through food – e. g. raw milk, liver, kidneys – as well as produced naturally by the body itself. GSH itself is one of the so-called thiols, i.e. sulfur-containing molecules, due to its sulfur nucleus. It is currently one of the most talked-about food supplements, as it offers a large list of benefits – endogenously from preventing oxidative damage to maintaining overall health and protecting the immune system.